“Room temperature” silicone plastination has the twin advantages of reduced cost and simplicity of set-up. At its best it can yield specimens which are the equal of those produced by low-temperature impregnation. However, the increase in viscosity of the polymer at room temperature leads to a shortened life of the polymer/chain-extender mixture. While the effect of temperature on the rate of thickening of the reaction mixture is generally recognised, no quantitative data have hitherto appeared in the literature. What do we mean by “room temperature”? In this study, daily maximum and minimum ambient laboratory temperatures were monitored over six months in a UK laboratory, and the viscosity of Biodur 10/S3® and S15/S3® polymer mixes were measured over the same time period.

Results show that seasonal fluctuations in ambient temperature had a marked effect on the rate of increase in viscosity in the samples tested. S10/S3 showed a gradual increase in viscosity up to a critical level (around 30-40 Pa s), at which point the increase became exponential. The viscosity of S15/S3 was particularly affected by a rise in mean laboratory temperature, with one sample becoming unusable within 25 days.

Room temperature impregnation appears to be an attractive option for reasons of safety and economy, and this is the method currently employed at St. George’s, University of London. However, there are significant cost implications due to the shortened shelf-life of S10/S3. S15/S3 is not suitable for use at room-temperature.

Plastination as a method of  producing long-lasting, high-quality anatomical specimens has become widely used in biomedical curricula around the world (Fasel, 1988; Latorre et al., 2004; Lozanoff, 2004; Mansor, 1996; Riederer et al., 2004; von Hagens et al., 1987). Many institutions, finding their resources being ever more stretched, have turned to plastination to preserve one of their most valuable resources: embalmed cadaveric specimens. The recommended methodology involves low-temperature dehydration in acetone, then silicone impregnation under vacuum at -15 to -20º C (von Hagens, 1985, de Jong & Henry, 2007). However, it is possible to produce specimens of equivalent or near-equivalent quality by impregnation with silicone polymer at room temperature (Kularbkaew et al., 1996; Miklošová, 2002; Raoof, 2001; Zheng et al., 1996; de Jong and Henry, 2007; Sagoo & Adds, 2013). This may be seen as an attractive option by institutions for which the capital cost of setting up a low-temperature facility, or for whom the stringent Health and Safety requirements which the use of large quantities of acetone inevitably engenders, may prove a deterrent.

The potential drawbacks of the room-temperature process are increased shrinkage of the specimen, and increasing viscosity of the polymer/chain-extender reaction mixture. Increasing viscosity is an inevitable consequence of adding chain-extender (Biodur® S3) to the silicone polymer (Biodur® S10 or S15), however the rate of increase in viscosity is known to be slower at lower temperatures, enabling the reaction mixture to remain viable for longer. At room temperature the increase in viscosity is accelerated, though no data currently exist to demonstrate this quantitatively; similarly, there are no data in the literature showing how the rate of increase in viscosity is related to differences in ambient temperature. Although the term “room temperature” is frequently encountered in the literature, its meaning will obviously vary depending on climate, time of year, and the presence, or lack, of air-conditioning in the laboratory.

This study aimed to provide the raw data which show how the viscosity of the silicone/chain extender mixtures changes over time, and how this change is related to ambient temperature in a UK laboratory over a period of 6 months.

The daily maximum and minimum ambient laboratory temperatures were recorded on a digital maximum/minimum thermometer (RS Components Ltd.) over a period of six months, from the end of December through to the end of June (i.e. from winter to summer in the U.K.). Concurrently, viscosity measurements were carried out on separate samples of Biodur S10/S3 (100:1) and S15/S3 (100:1). To determine the viscosity of the polymer, steel ball bearings of known mass and diameter were dropped into a cylinder of polymer of known height. The time taken for the ball bearings to sink to the bottom of the cylinder was recorded using an Oregon scientific digital stop-watch (RS Components Ltd.). Each reading was recorded three times, i.e. three ball bearings were dropped separately and timed on each occasion, and the mean calculated. The height of the column was measured in between each reading to take into account the displacement of the individual ball bearings. The time taken for the ball bearings to reach terminal velocity was considered to be negligible and was disregarded.

v    = velocity of sphere through liquid.

The viscosity data were then plotted against temperature.

The maximum and minimum laboratory temperatures showed a general seasonal variation, with the trend, unsurprisingly, being towards warmer conditions in the summer. From December to March, the minimum was generally between 16 – 18º C, and the maximum was generally between 20 – 22 º C. From March to June there was a marked increase in both maximum and minimum temperatures up to peaks of 26º C (maximum) and 22º C (minimum) (Fig. 1). 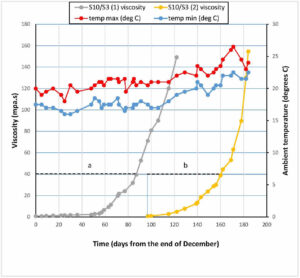 Figure 1. Maximum/minimum laboratory temperatures and viscosity of two samples of Biodur S10/S3 (S10/S3 1, S10/S3 2); a, b represent the length of time taken in each case for the polymer mixture to reach a viscosity of 40 Pa.s.

During the test period, two samples of Biodur S10/ S3 were prepared at a ratio of 100:1 by volume, the first at the start of the test period, and the second around three months later. In both cases, the initial viscosity was 0.73 Pa.s. Both samples showed an initial period of gradually increasing viscosity, until, at around 40 Pas, the increase became exponential. Readings continued to be taken up to around 150 Pas, after which the sample was discarded.

The time taken, in each case, for the polymer mix to reach a viscosity of 40 Pa s is represented by the horizontal lines “a” and “b” on Figure 1. This period was 89 days for the first sample of S10/S3, and 66 days for the second sample. 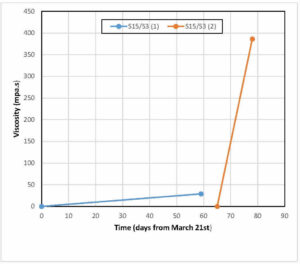 Figure 2 shows the viscosity of two different samples of Biodur® S15/S3 over time, compared to maximum and minimum laboratory temperatures. The first sample of S15/S3 was prepared in March and the second in May. The viscosity of the first sample increased from 0.032 Pas at t0 to 29 Pas in a period of 59 days. This represents an increase of over 9 x 104 %. The viscosity of the second sample increased from 0.032 at t0 to 386 Pas in 25 days, an increase of 1.2 x 106 %. The mean temperature during the first test period was 19.9º C. During the second test period the mean temperature was 21.75º C.

It is well known that Biodur® silicone/chain extender mixtures will become gradually more viscous over time and that this thickening will be more rapid at room temperature than at -25º C. Up to now, however, quantitative data on the effect of temperature on the viscosity of the reaction mixture has not been available in the literature. In this study, we supply the raw data on time, temperature and viscosity for Biodur® S10 and S15 at ambient temperatures.

The increase in viscosity in both samples of S10/S3 followed a similar pattern. There was an initial period of gradual increase, followed by an exponential phase once a critical viscosity level was reached. Once this critical level is passed, it is clear that the mixture will rapidly become unsuitable for use. The time taken to reach this point differed in the two samples tested in this study. The first sample, prepared in December, took 89 days to reach a viscosity of 40 Pa.s, while the second sample, prepared in April, took only 66 days. From Figure 1 it can be seen that the second test period coincided with an overall increase in laboratory temperature, from a mean of 18.82º C in the preceding 90 days, to 21.51º C during the test period.

Biodur S15/S3 is initially significantly less viscous than S10/S3, with a viscosity approaching that of water (Lide, 2002). The two test samples of S15/S3 showed very different behaviours over time. The viscosity of the first sample rose quite slowly from 0.032 to 29.0 Pa.s over a period of 59 days. At this point the polymer had become thick and sticky and unsuitable for further use. The viscosity of the second sample rose much more rapidly from 0.032 to 386.0 Pa s over a period of only 25 days (Fig. 2), by which time it had become almost solid. Again, the second test period coincided with an increase of ambient laboratory temperature, from an average of 19.9º in the first period, to 21.75º C in the second.

It is clear, then, that a slight increase in temperature can have a significant effect on the longevity of the reaction mixture during room temperature impregnation with Biodur® S10/S3 and S15/S3. The effect of temperature on the S10/S3 mixtures in this study was considerably less marked than the effect on the S15/S3 samples.

In conclusion, while room temperature plastination may appear to be an attractive option for reasons of cost, space and safety, there is inevitably an increased turnover of polymer due to the more rapid thickening of the reaction mixture, and this will lead to higher costs of consumables when compared to a cold-temperature set up. Because of its susceptibility to warm temperatures, S15 appears to be unsuitable for room-temperature plastination.