Tissue plastination is known to be an excellent method for preserving anatomical specimens. The products are generally durable and usable for academic and clinical education. However, prolonged periods of storage in changing temperature and humidity parameters can lead to certain biological changes if not stored properly, which may include growth of opportunistic organisms. This study reports a case of what seemed like a fungal growth on silicone plastinated brain slices in our facility. In order to study the causative organisms we carried out macroscopic as well as microscopic examinations of the isolated specimens. Characteristic feathery crystallizations were largely seen on the white matter. After incubation of surface scrapings and obtaining cultures on growth media, mycological analysis identified Aspergillus fumigates as the causative organism, a common airborne fungi. Most of our collections of contaminated brain slices have been tested, cleaned and finally disinfected using two methods; one was a method published by Prinz et. al.(1999) the second was an idea to use an industrial laboratory surface disinfectant (Virkon ®) commonly used in our hospital laboratories. After further investigations and expert consultations, the crystals were confirmed to be a procedural error of adding extra cross-linker from the source plastination laboratory and not in fact a fungal contamination.

Tissue plastination has been used for many years to preserve anatomical and biological specimens. The technique was developed in 1978 by Gunther von Hagens of Heidelberg, Germany. The process takes the form of replacing water and lipids in biological tissues with polymers (silicone, epoxy, polyester) that are impregnated and then hardened. The outcome is hard, dry, odorless and durable specimens (von Hagens et al., 1987).

In the high temperature climates and dry conditions of Riyadh city in Saudi Arabia, our institution imported readymade plastinated anatomical specimens for the purpose of teaching medical students. Some of these specimens were more than 5 years old and are stored at room temperature (21-25° C) with central air conditioning and dehumidification systems. However, the storage facility encountered a long period of a malfunctioning air conditioning system during summer vacation. In the room in which our plastinated specimens were stored the temperature reached 30° C to 35° C over this period. Additionally, the technologists reported that at one time a broken fire sprinkler had flooded the laboratory floor over the weekend during the same summer break, and this is likely to have increased humidity levels in our storage facility, although no direct damping or damage has been reported. 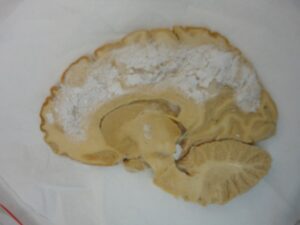 However, after several observations by our staff regarding the change in appearance of some plastinated items, we decided to isolate these specimens and investigate the cause of these changes. Six S10 silicone plastinated specimens showing morphological changes were initially examined: 2 brain slices (Figure 1), 1 lower limb, 1 thigh cross-section, 1 lung and 1 sagittal head and neck section (Figure 2).

Some of the anatomical specimens showed minor wear and tear marks with no deep penetration; these were not included. Others had simply a layer of dust that was easily brushed off and cleaned with a damp cloth. Out of the 6 specimens collected, the most striking feature was the accumulation of dry, white crystallization on the 2 brain slices. These were seen largely on the white matter of the brain slices. It was of our own interest, therefore, to harvest some of this crystallization for an initial microbiological investigation. After the investigation, the rest of our collection of S10 brain slices was subjected to a planned treatment. 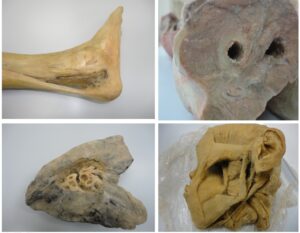 After consultation with our microbiology laboratory staff, a specific protocol for obtaining cultures was followed. Materials used for this analysis were:

Scrapings of suspected areas of growth on the initial six specimens were inoculated onto labelled Sabouraud dextrose agar and corn meal dextrose agar Petri dishes. In addition, multiple swabs of the benches in the storage area were taken as a control, and each swab was inoculated onto similar media. These Petri dishes were then placed in an incubator at 30° C for 7 days. The fungal colonies that grew were taken to a mycologist for analysis in the main hospital's Microbiology laboratory, where fungi isolates were identified. The traditional test of adhesive tape preparation was initially carried out, this helps to obtain a sample by using the adherent side of a transparent cellophane tape. The carrier transparent tape is then placed on top of a microscope slide on which two drops of lactophenol cotton blue stain have been placed;  two more drops are then placed on top of the tape, which is then covered with a cover slip. The slides are then examined under a light microscope to identify the fungus species (Forbes et al., 2007, pp.653, 657).

B. The Virkon Method

The Virkon used is in powder form. The desired concentration is 3% (i.e. 3 grams in every 100 ml of water). The solution has a bright pink color when  active. However, the solution will lose this color within 7 days, and consequently may lose its active properties. Therefore, it is advised to prepare the solution on the same day. When handling the powder form of Virkon  it is highly recommended to use gloves and a face mask, as  it may cause irritation to the skin or eyes, or to lungs if inhaled. 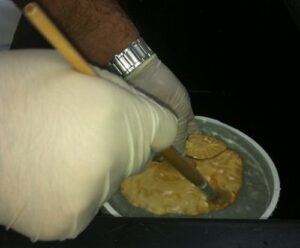 Figure 3 - Brushing the crystallization while the brain slice is submerged in water.

A. Testing for infection

Following one month of observation, positive cultures for fungi were found on Sabouraud and corn meal media corresponding to the two brain slices. 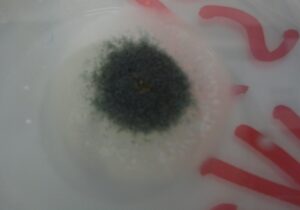 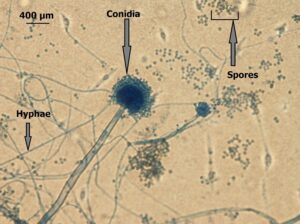 The majority of the swabs taken from damaged brain slices showed growth on Sabouraud media of common airborne fungal species, such as Aspergillus fumigatus, Penicillium expansum and Aspergillus niger. However, the transparent tape impression on the crystallization did not show clear signs of fungi, which made the diagnosis of fungal infection inconclusive.

Both treatment methods showed excellent results; neither of the brain slices was damaged by the solution nor did they show any evidence of microbiological growth after they had been dried. However, there were a few crystal remnants in some fissures that were colored with the Virkon solution's pink color (Fig. 6). This minor pink discoloration was the only reported disadvantage. 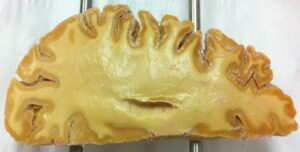 Figure 6 - A plastinated brain slice after the Virkon treatment showing some minor discoloration.

After drying the specimens, the brain slices were tested for any microbiological contamination that may damage the specimen in the future. The tests were done by surface swabs on separate labelled Sabouraud media.

It is not uncommonly reported that anatomical specimens can host opportunistic organisms, especially fungi, but not the plastinated ones. In the literature, a few articles report cases of fungal contamination; Prinz and colleagues (1999) reported fungal growth on plastinated specimens from their institution in Brazil, and suggested performing mycological test on suspected specimens. They found that plastinated abdominal sections with visible contamination had grown Aspergillus fumigatus, whereas infested plastinated brain specimens showed Penicillium janthinellum (Prinz et. al., 1999). This is different to our finding of Aspergillus fumigatus with its apparent preference to brain slices, as other specimens tested negative for fungal growth. In another paper that was published by Hammad and colleagues (2002), fungal growth of Aspergillus species was reported under similar conditions, but in formalin-fixed human cadavers. However, they reported that it may be possible for certain types of fungi to adapt and develop resistance to low formalin concentrations. Plastinated tissue is different in the sense that it lacks moisture, and almost never requires closed-chamber storage when compared to formalin-fixed specimens (Hammad et al., 2002). According to Winn et al. (2000, p. 1178), some Aspergillus species have a tendency to produce local birefringent crystals in the form of deposits of calcium oxalate in blood vessels in living humans. In addition, cadavers lack vitality and immune defense mechanisms to fight infections. Moreover, Forbes et al. (2007, p.669-670) report clinical cases of Aspergillus fumigatus infection in the central nervous system of immunocompromised patients). These crystallization processes in living beings are not the same as the feathery crystallizations that were found on our isolated plastinated brain specimens as seen in Figure 1.

In summary, opportunistic fungal growth may occur on silicone-plastinated brain slices. In cases of fungal contamination it is advisable to follow the steps of disinfection described above. Both the Prinz et al. (1999) chlorine alcohol/formalin and Virkon treatments would disinfect and remove any crystallization of the above-mentioned fungal species on contaminated brain slices. However, in the case reported here, we have concluded that the crystals that we observed were caused by a laboratory technical error of using excessive cross-linker, and were in fact not a result of fungal colonisation.

Although the disinfection processes described here caused a minor discoloration, this effect is barely noticeable and insignificant (Fig. 6). In addition, it is possible to use other disinfectants that are equal to Virkon, however it must be borne in mind that the solution should not be aggressive as this may damage the specimen.

Attendance at the plastination meetings and workshops is highly recommended. These meetings allow specific problems to be addressed and guidance can be obtained from the pioneers of this technology. Furthermore, supervision of technical staff is highly advised to assure mixing the correct amounts of solution at the right concentrations.

Based on these findings, when white feathery crystallizations are seen on S10 plastinated brain slices they should not to be confused with fungal contamination or decay. If these crystals are seen on plastinated specimens they can be removed by using the submerged brush method. On wet specimens it is advised to follow one of the disinfection methods as a precaution, to prevent any fungal growth.

The Authors would like to thank Mr. Daniel Corcoran for his expert consultation. Secondly, Mrs Nada M. Abutaleb from department of Microbiology in KFMC for her collaboration in producing this article. Finally, thanks to Prof. Omar H K Kasule Sr., Dr. Abdulhakim Alshehri, Mr. Radwan BaAbbad and Mr. Bader Alanazi for their support.