Plastinated brain specimens are easy to handle, long-lasting, and can be used as effective tools in neuroanatomy teaching. This study compares four different staining methods to differentiate between the gray and the white matter of brain specimens. It further investigates an alternative and economical method of room temperature plastination of the stained specimens.

A total of 10 formalin-fixed brain specimens were obtained from St. George’s University of London anatomy dissection room. The tissue was used in accordance with the Human Tissue Act (2004). The brain specimens were cut into sagittal or coronal slices, and then stained. The plastination process involves fixation, dehydration, impregnation and curing. Dehydration was performed at -30°C, over 3 weeks, using acetone of increasing concentrations. Vacuum impregnation with BiodurTM S10/S3 and curing with S6 were carried out at room temperature (15-18°C). The size of the brain specimens was measured at 3 stages; after staining/before dehydration, after impregnation and after curing. The ability of the stains to withstand the plastination procedure was also assessed.

The Roberts staining method was found to be the most effective because it showed the clearest differentiation between the gray and white matter. The color produced by all staining methods was maintained following completion of plastination. The average shrinkage of the stained brain specimens after plastination was acceptable (12.80% in length, and 9.95% in width), and there was minimal effect on the overall appearance of the specimens. This study further extends the potential applications of the staining method combined with a cost-effective room-temperature plastination method.

Plastination is a unique technique to prevent decay and decomposition of valuable cadaveric specimens. It is a process of removing water and fat from cadaveric specimens, and replacing them with polymers through dehydration, impregnation and curing processes (von Hagens, 1986).

Plastinated specimens can be extremely useful teaching tools, especially in neuroanatomy. Plastination increases durability and longevity of fragile wet brain specimens. It has been described in the literature how plastinated specimens enable students to have a more real hands-on learning experience, in comparison to artificially created resources (Weiglein, 1996; Holladay and Hudson, 1989; Cook and Dawson, 1996; Baeres et al., 2001; Lozanoff et al., 2003).

In this study, the following four staining methods were used; Mulligan, tannic acid Mulligan, LeMasurier and Roberts (Gregg, 1975; LeMasurier, 1935; Roberts and Hanaway, 1969). This was to enable comparison of different staining techniques and to find the optimum method that differentiates between gray and white matter most effectively.

Plastination is often performed in specialized laboratories at low temperatures between -15°C and -25°C (as described by Tianszhong and Jingren, 1998; de Jong and Henry, 2007). However, in the present study, the plastination (forced impregnation) of the stained brain specimens was performed at a room temperature of +15 to +18°C. The reduction in size (width and length) of the brain specimens at the following stages: before dehydration, after impregnation, and after curing, was assessed.

Moreover, the study assessed the ability of the stains to withstand the plastination procedure. Although staining of brain specimens can be effective, previous studies have shown the color and intensity of the stain have a tendency to fade with time (Gregg, 1975). Baeres and Møller (2001) have reported that Mulligan staining does not fade on plastination. In this study, we investigated the ability of Mulligan, tannic acid, LeMasurier and Roberts stains to withstand plastination.

The authors believe that this technique could extend the potential applications of staining and room temperature plastination, along with the advantage of simplicity of set-up (Sagoo and Adds, 2013).

The brain specimens were obtained from 10 formalin-fixed cadavers, average age 72.9 years (range 71 to 91 yrs.). The cadavers were embalmed with 10% formalin, 10% polyethylene glycol, 5% phenol and 75% ethanol in the Dissecting Room of St. George’s, University of London.

Consent for anatomical examination and imaging had been given under the Human Tissue Act (2004). Out of 10 brains, two brains were cut into sagittal slices and one into coronal slices of approximately 1cm thickness, using a rotary meat slicer. The remaining brain specimens had been previously sliced and stored in 50% ethanol solution for two months. This produced a total of 37 brain slices.

The stained brain slices were pre-cooled to +4oC in an air-tight container, for 24 hours. This was done to avoid temperature shock and potential shrinkage of the brain slices, when submerged in pre-cooled acetone at -30oC. The acetone volume used was 10 times greater than the specimens to be dehydrated. The water from the brain specimens was replaced with acetone of gradually increasing concentrations (94-100%), over the course of 3 weeks. The concentration of acetone was monitored for verification of complete dehydration. Ideally, modified freezers should be used for the dehydration process to prevent risk of explosion; however, in this study, due to lack of resources, air-tight containers were used in standard laboratory freezers during dehydration. Baptista et al. (1992) reported that maintaining acetone vapor below zero degrees Fahrenheit (-17.78°C) is essential to prevent the vapors reaching flammable levels.

The dehydrated specimens were removed from the acetone bath and immersed in pre-cooled BiodurTM   S10/S3 (100:1) at -30oC. The silicone level was 2-4 cm higher than the level of the specimens to facilitate impregnation. These specimens were then placed in the vacuum chamber to equilibrate for 24 hours at room temperature (15-18oC). The pressure was then reduced gradually over an average period of six days, to replace the acetone in the specimens with silicone polymer. The pressure was measured using an analogue pressure gauge installed with the impregnation chamber, and gradually lowered until the final pressure of 5mmHg was reached. The impregnated specimens were then removed from the polymer and drained on a paper towel for a period of 2 - 3 days.

BiodurTM S6 polymer was used for curing. The specimens were cured in a closed chamber where BiodurTM S6 was placed in a petri dish to help cross link the polymer chains in the specimens. This was done over a period of three weeks.

Measurements of the specimens were taken with a steel rule (millimeters) at three stages of the plastination process: after staining/before dehydration, after impregnation, and after curing. These measurements
were taken to establish the degree of shrinkage. In addition, photographs were taken at each step. A paired T-test (one-tailed) was performed on the lengths and widths of the brain specimens, using Graph Pad Prism 4 software.

For staining color comparison, a method for grading the stained brain specimens was devised (See Grading Table 1) to investigate the difference in staining.  It was performed visually and the differentiation between the gray and white matter in the specimens was graded as follows:

The effects of different staining methods on the brain slices were compared (Table 2). The most effective stain resulted in relatively clearest differentiation between the gray and white matter, and the strongest color intensity.

Overall, the Roberts method stained 13 out of 18 (72%) slices effectively, with good contrast and color intensity. There was often a burgundy line (Fig. 1) between the ruby-red-stained gray matter and the pink stained white matter. 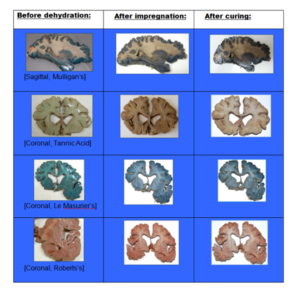 Table 2 – Images of stained specimens at different stages of the plastination process – Before dehydration, after impregnation, and after curing.

From the slices stained by Mulligan’s method, 2 out of 7 (29%) were stained effectively; however, relatively, there was a moderate differentiation between the gray and white matter, which were both different shades of blue. The LeMasurier method stained only 1 out of 8 (12%) of the slices, with relatively poor differentiation between the gray and white matter. The tannic acid method did not stain any of the slices in this study effectively.

Measurements of each specimen were taken before and after these stages of the process: before dehydration/after staining, after impregnation, and after curing.

From analysis of the raw data, there was a decrease in the size of the brain specimens after impregnation. The mean shrinkage was 12.80% (length) and 9.95% (width) (P < 0.05) (Table 3). Despite the shrinkage, the structural details were preserved after curing and the stain withstood the process of plastination. The average impregnation time for the room temperature plastination was approximately six days, and the overall process took approximately 8 weeks.

It has been found that 1 cm thick slices tolerate handling without framing (Ulfig and Wuttke, 1990). In this study, Roberts’ method was found to be the best method to differentiate between the gray and white matter. A demarcating burgundy line was found between the grayand white matter. Although the reason for this line is unclear, it contributed towards the effectiveness of the stain. The tannic acid method was found to be ineffective and the slices did not pick up the stain. The modified Mulligan’s and LeMasurier’s methods were of intermediate effectiveness. The staining of the brain specimens from these methods was inconsistent, resulting in relatively poor differentiation between the gray and white matter. In previous studies at St. George’s, Mulligan stain was found to be effective in staining the slices (Sagoo and Adds, 2013); however, in this study it was not as effective. The inconsistency in staining could be due to unknown pathologies that could have affected the brains, or differences in storage and sectioning of the specimens.

In comparison to the low temperature plastination technique (de Jong and Henry, 2007), the room temperature plastination method used in this study produced results of a similar standard, with shrinkage levels of approximately 10-12%. This is similar to the levels of shrinkage reported by Suriyaprapadilok and Withyachumnarnkul (1997) for plastination of stained brain slices (approximately 10%). The overall appearance of the specimens was maintained and the level of shrinkage was acceptable for neuroanatomy teaching. Furthermore, in wet specimens, the stains usually fade unless kept in the dark (Gregg, 1975); however, in this study, the plastinated slices retained their color and have thus far shown no tendency to fade.

Hence, the staining and plastination methods used in this study were found to be capable of producing good results with lower financial set-up costs. Adoption of the technique by more universities and institutions could advance neuroscience teaching, with additional financial and practical benefits.

A number of factors such as variation in the age of the brain specimens and daily room temperature changes may have affected the results of the study. Additionally, studies suggest that if there was any damage to the white matter of the specimens, then the stain would be unable to differentiate between the two types of matter, due to the damaged area of tissue. Thus, good preservation of the brain is very important in order to reveal anatomical details (Roberts and Hanaway, 1969). No initial tests were performed to determine any observer variability for grading the stained tissue. For future studies, piloted and validated grading methods will be used to yield more accurate grading. No measurements were taken to establish the shrinkage of gray matter in comparison to white; however, no obvious distortion was found. This comparative shrinkage between gray and white matter could be investigated in future experiments.

The authors would like to thank Mr. Philip J. Adds for his support and guidance. We are most grateful to those individuals who donated their bodies and brains for research purposes, without whom this study would not have been possible.

The other staining methods used in this study were adapted from the initial Mulligan’s method, by varying the solutions and timings accordingly.

Tannic acid staining method gives a gray-black color to the grey matter, and produces a long-lasting stain (adapted from Gregg, 1975). The steps are as follows:

LeMasurier’s staining method creates a sharp contrast by producing a bright blue colored stain in the gray matter, which is effective and long-lasting (adapted from LeMasurier, 1935). The steps are as follows: