The tracheo-bronchial tree is rather difficult for anyone to understand without visual aids. Luminal corrosion casts made of silicone sealant material give a better orientation that aids understanding. Many different materials like gelatin and different types of silicone, and different methods such as injecting the solutions with a syringe and a gun have previously been used in cast preparation. Some methods are costly, and some are difficult to carry out, requiring much care in the procedures. In the present study, the sealant material “WACKER GP” general purpose silicone sealant, (Wacker® Wacker Chemie AG Munich, Germany), which is low in cost and easily available in hardware shops, has been used. The method adopted to inject the silicone using an injection gun is relatively very easy. The prepared bronchial tree cast was found to be safe to handle, soft, flexible and has long-lasting durability. The cost of preparation is very low compared to other methods.

A corrosion cast of the lungs demonstrates the three-dimensional anatomy of the internal structure of lungs, which is necessary to understand the branching pattern of the bronchopulmonary tree. This helps in surgical management of lung disorders, helps anatomy students to understand the orientation of the branching pattern of the tracheo-bronchial tree up to the level of the alveoli, and also helps in other medical specialties. Knowledge acquisition by students may occur faster as they employ multiple senses to both see and feel actual representation of each organ. Lung conceptualization of difficult physiological processes is made easier. Students’ knowledge, clinical examination and diagnostic skills are enriched accordingly.

Various authors have described the use of different materials to prepare corrosion casts of the bronchial tree, for example 12% warm gelatin solution, ‘Dr. Fixit’ silicone sealant, and GP silicone sealant (Tompsett, 1970; Menaka, 2007; Prasad, 2009; Casteleyn et al., 2009). Since there is a continuous decrease in the luminal size as the tree divides, the material must be able to reach the terminal end up to the level of the alveoli. The material should be easy to inject without any harmful effects to the individual doing the procedure; must solidify while remaining flexible when the cast is prepared; should be economical and cheap; and should be easy to procure with the other necessary materials. Bearing in mind the above factors, our corrosion cast was made using quite cheap and economical silicone sealant material, which is commonly used for sealing roof leakages.

3.Fresh lungs from human body or from sheep/ goat/ buffalo from slaughter house. If the fresh lungs cannot be used immediately, they can be kept in the freezer without fixing in formalin, until they can be used.

The lungs used in this study were from sheep, and were obtained from the local slaughter house.  The lungs were first washed with running water, and were then inflated with the balloon inflation pump until the organ resumed its fully inflated condition in the original anatomical position. It was then allowed to deflate. The silicone sealant tube was fixed in the gun and the lever was pressed slowly to force the silicone into the trachea (Fig. 2). 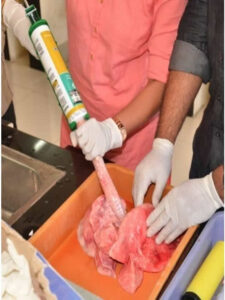 The trachea was then gradually milked downwards as the silicone was forced into the lungs, until the surface of the lungs appeared as a patchwork of rosettes and became uneven. Care must be taken not to spill the silicone, and to allow it to drain slowly into the bronchial segments. The lungs were then suspended overnight to allow the silicone to solidify. Finally, the lungs were immersed in concentrated hydrochloric acid, Assey-36.46 (Nice Chemicals) overnight, or allowed to decompose naturally in a water bath under running tap water. The parenchyma gets digested in one night when the lungs are immersed in hydrochloric acid, and the cast should then be washed thoroughly in running water and then allowed to dry. Natural decomposition of the parenchyma may take 4 to 7 days for the decomposition of the soft tissue. The parenchyma is then washed off leaving behind the cast. The dry specimen can be displayed in the museum or used for teaching. 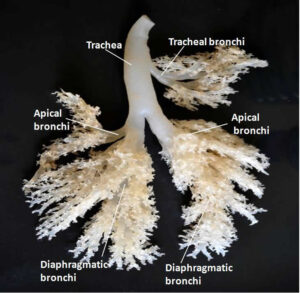 The tracheo-bronchial tree cast after digestion showed the branching pattern clearly. The bronchi in both right and left lungs were clearly divided. The right lung showed tracheal bronchi and the main bronchus divided in to apical and diaphragmatic bronchi. The left lung showed only apical and diaphragmatic bronchi. The branching pattern from the trachea to fine bronchioles was clearly visible (Fig. 3).

The final prepared cast was soft, flexible, non-toxic and safe to handle. The cast is long-lasting and durable, and can be used for teaching or for museum purposes (Fig. 3).

When compared to other techniques, the method described here is found to be both cheaper and easy to do. The material is easily available and is cost-effective when compared to other methods. Hartmann and Groenewald (2014) have used ‘Mold Max’ 30 RTV silicone, durometer shore 30A hardness, viscosity 25000cps, mixed with silicone thinning fluid to reduce the viscosity by 50%. These chemicals have to be imported and are not always easily available in India; thus they may not be cost-effective. Henry (2000) used RTV silicone with its catalyst to fill the airways and then allowed to stand for 24 hours. Later it is boiled for 24 to 48 hours to remove soft tissue. Any remaining tissue was further treated with 10-20% H2O2. RTV silicone is available in India, but the catalyst is not available, and has to be imported. Rakesh Narayanan (2015) used LAPOXTM epoxy resin with hardener to prepare the bronchial cast. The disadvantage of this method is that the epoxy resin and hardener reaction is exothermic, hence care has to be taken while mixing. The procedure needs to be done quickly after mixing the resin with the hardener, otherwise the solution will solidify. The cast prepared is hard and brittle, but has the advantages of good shape and durability.

Finally, comparing with the above methods, the method described here using silicone sealant is simple, without any adverse effects, and is safe to handle and prepare. The specimen is flexible and durable (Fig. 3). It can be handled freely for teaching or mounted for display.