Establishing A Plastination Laboratory at The College of Veterinary Medicine, University of Basra, Iraq

Plastination is a laboratory preservation technique applied to specimens so that they can be used as models in the study of anatomy, for both research and education. This technique reduces the exposure to harmful gases and toxic fumes, and provides fixed, non-perishable samples at a low cost. The technique uses simple equipment and laboratory devices that can be obtained locally with low costs.

The plastination laboratory in The College of Veterinary Medicine at the University of Basra, Iraq, was designed and built to use the standard S10 method of plastination.    The different ways of financing the laboratory, and the technical equipment and supplies necessary for the establishment of the laboratory will be described with the initial results of this experiment.

The plastination technique was created by Dr. Gunther von Hagens in Heidelberg, Germany, in 1978 as a unique way to preserve specimens and tissues. This process replaces the fat and water in biological tissues with polymeric materials which are subsequently hardened, to produce dry, odorless and non-perishable specimens (Weiglein, 1997).

The plastination technique requires careful handling of chemicals to avoid injury from inhaled fumes or contact with the skin. The compounds used have a potential irritating or allergic effect, therefore adequate ventilation, impervious gloves and safety glasses must be used (Holladay et al., 2001). In recent years, plastination has revolutionized the way students can study anatomy and has become an important means of preservation of organs (Latorre et al., 2007; Riederer, 2013).

A plastination laboratory design often involves many technical and structural facility problems. This can result in economic problems that may delay the possibility of obtaining plastinated anatomical specimens in a short period of time (Reina-de la Torre et al., 2004).

The main concern in designing a plastination laboratory is to control the potential danger for fire or explosion. The main chemical used in the plastination process is acetone, which is used in large amounts and can be very dangerous if not handled correctly. Acetone has a flash point of -18 °C. Cooling acetone in the freezer to -25° C reduces this potential hazard (Gubbins, 1990).

At The College of Veterinary Medicine at the University of Basra, plastinated anatomical sections have been prepared to aid in teaching anatomy. The plastinated specimens are non-toxic, dry, can be used in every climate, and demonstrate the exact anatomical details.

Setting up the laboratory

The plastination laboratory was designed according to the Technical Leaflets for Plastination from Heidelberg (Von Hagens, 1986), and with the technical support and cooperation of the plastination laboratory at the University of Zagazig (Egypt). Financial support was obtained from the College of Veterinary Medicine, University of Basra, to increase the integrity of laboratories and to encourage new technologies in teaching anatomy.

The design of the plastination laboratory was implemented to initiate the S10 standard method, which includes four steps: fixation, dehydration, impregnation and curing. 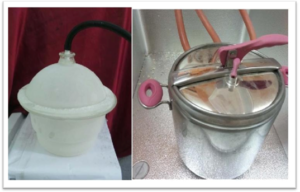 (3) During impregnation, the specimen was placed in liquid silicone resin in a vacuum chamber (Fig. 1). Vacuum was applied slowly, the acetone was made to boil and leave the cells, allowing the polymers to penetrate. 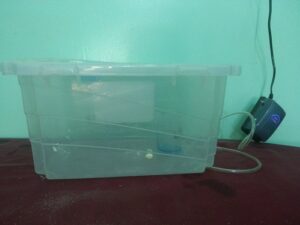 (4) Curing was the final step, in which the specimen was placed in an enclosed chamber containing the curing agent S6, for 5- 6 days for full hardening (Fig. 2). The plastination laboratory used a modified commercial freezer for impregnation and dehydration, with the compressor and thermoregulation isolated outside of the freezer. The freezer box joints were treated with rubber silicone to avoid an acetone vapor explosion (Fig. 3). Four small holes for passing the vacuum lines were made in the body of the freezer and connected to the vacuum pump (ALUE ve115 rotary type 220-240V, 50/60 Hz, single phase). The vacuum pump was turned on and off every 3 hours by using electronic timers (Fig. 4). We used stainless steel containers (16 litres capacity) for dehydration and impregnation, with a galvanized metal basket. During forced impregnation, the sample was immersed in a polymer solution (Biodur S10 +S3) and placed in a vacuum chamber. 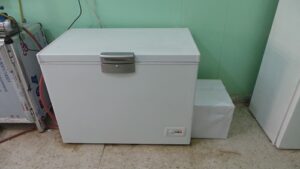 The plastination laboratory was designed to be near the dissecting room with an area of ​​24 square meters, containing two freezers, one for dehydration and the other for forced impregnation (Fig. 5). It contains a water sink and drain, as well as a good ventilation system using exhaust fans with a capacity of 100 cubic meters/hour. All electrical switches in the room are isolated by rubber silicone. There are two storage rooms for chemicals and equipment.

The plastination laboratory at the College of Veterinary Medicine, University of Basra, has produced good quality plastinated specimens since October 2013, which are used as anatomical models for education and for studying veterinary anatomy. Examples of specimens produced are: a dissected ostrich heart, a series of dissections of buffalo brains, a dissected sheep’s kidney, the muscles of the eye of an ox, and a dissected fish.

In the future, our ambition is to increase the number and quality of our plastinated specimens. We believe that the plastination technique facilitates the connection of students with anatomy, thus our experience with this technique has been positive.

Suggestions for the use of plastination in medical education would include hiring highly trained technicians (at least one full-time) to ensure the continued production of high quality samples and safe handling of solvents and chemicals.