Anatomical specimens plastinated with silicone are known to be dry, durable, and odorless. Fungal contamination is rare. This report describes a case of fungal growth on a plastinated sagittal head specimen that had been incorrectly stored in a refrigerated body store, in what was a cold, damp, environment. The specimen was swabbed on to Sabouraud dextrose slopes and incubated for two weeks. Colonies were then selectively grown on Sabouraud dextrose agar plates. Two different fungal contaminants were identified: Penicillium corylophilum and Penicillium solitum. The contamination was limited to this single plastinate, and did not spread to other cadavers or plastinated specimens.

Plastination is well-known for producing anatomical specimens that are dry, odorless, and durable. They can be handled without gloves and can be stored without the need for special equipment or preserving chemicals. These qualities mean that plastinated specimens are ideally suited for anatomical education in healthcare and veterinary science (e.g., Sora et al., 2019; Klaus et al., 2018). Increased awareness of the toxic and carcinogenic properties of formaldehyde may mean that plastinated specimens may become even more ubiquitous in anatomical teaching institutions in future (Haffner et al., 2015).

While contamination of formalin-fixed cadaveric specimens by fungi (Elsebai et al., 2009) or other micro-organisms (Tabaac et al., 2013) is a well-known problem in anatomical teaching institutions, there have been few reports of contamination affecting plastinated specimens. The first report was by Prinz et al. (1999), who described a “massive fungal infestation” of their collection of plastinated specimens in Brazil, following a tropical rainstorm; Alshery et al., (2012) reported an apparent fungal growth on plastinated brain slices stored at temperatures of over 30 °C in Saudi Arabia; and Barros et al. (2015) described fungal contamination of a plastinated kidney, though unfortunately no details of climate or storage conditions were reported.

In this case study, a heavy growth of fungus on a single sagittal head section plastinated with silicone S10 is reported. The specimen had been mistakenly placed for storage in the refrigerated body store. This storeroom is used for storage of donated cadavers that have either been embalmed, or are in the process of being embalmed, and is maintained at 4 °C. Cadavers at our institution are routinely embalmed with either a formaldehyde-based embalming solution (for cadavers that are to be used for anatomy teaching), or with an alcohol-based solution that gives soft-fixed cadavers (for surgical training).

Swabs were taken from four distinct locations on the specimen (Fig. 1) and placed in transport medium (Transwab Amies medium without charcoal, MWE Ltd). Two Sabouraud dextrose slopes were then inoculated from each swab and incubated at 30 °C and 37 °C, respectively, for two weeks. Individual colonies were then picked off and cultivated on Sabouraud dextrose agar plates for ten days at 37 °C. 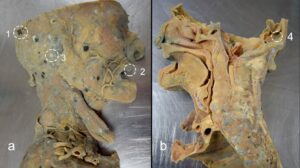 Fig 1. Fungal growth on a plastinated sagittal head and neck specimen (a) lateral; (b) medial; numbered circles indicate sites that were swabbed

Fungal contamination of plastinated specimens is not unknown, but is a rare occurrence, having been reported only three times previously to the author’s knowledge. In two of the previous reports, the authors suspected that adverse climatic conditions may have been responsible for the contamination (Prinz et al., 1999; Alshery at al., 2012), and in the third, the authors speculated that incomplete fixation may have been the cause (Barros et al., 2015). Cross-contamination from handling both plastinates and embalmed wet specimens in the Dissecting Room is another possible route of contamination. In the case reported here, the specimen had been plastinated some years previously using a modification of the standard Biodur® S10 technique, with room-temperature impregnation following dehydration at -20 °C. The specimen had been mistakenly placed for storage in the refrigerated body store, where donated cadavers in various stages of embalming are stored. It is not known how long the specimen had been there, but it is likely to have been there for several months. The atmosphere within the body store is cold and damp, with a strong smell of formaldehyde from the embalming fluid, such that the room must be vented before staff are permitted to enter it – an unlikely environment for fungi to flourish, it might be thought. However, Penicillium corylophilum is known to colonize cold, damp environments (Boka et al., 2009), and Penicillium solitum is known to thrive at low temperatures, and has even been reported in Antarctic marine sediments (Gonçalves et al., 2013).

While outbreaks of mold are relatively common within the Dissecting Room, these usually occur on cadavers that have been used for teaching for many months, by which time the embalming fluid may have dried out, and/or been diluted by the spray solution used to moisten the bodies (Bioguard® disinfectant diluted 1:3 with tap water). Mold in the body store has not been seen previously, and, on this occasion, it was limited to this one plastinate, and did not spread to any of the cadavers. Mold has not been seen on any of our other plastinates, and, following cleansing by immersion in dilute bleach followed by scrubbing under running water, no further fungal growth has been seen on this specimen.

The author is grateful to Aviva Baker and Rachel Delgado, South-West London Pathology, St George’s Hospital NHS Trust, for their invaluable assistance. The author also sincerely thanks those who donated their bodies to science. These donors and their families deserve our highest gratitude.