The standard method for plastination with Biodur TM S10/S3 involves low-temperature dehydration in a volatile intermediary solvent followed by forced impregnation under vacuum at -15°C.  However, some institutions have been reluctant to install low-temperature impregnation equipment because of health and safety and cost considerations.  The aim of this study is to investigate a low-budget and simple to set up room temperature plastination procedure to prepare neuroanatomy teaching resources.  Previous studies at St George’s, University of London have shown that a low-temperature dehydration/ room temperature impregnation protocol for BiodurTM  S10/S3 can produce results comparable, if not equal, to the standard method.  Fifty-four formaldehyde-fixed brain slices were dehydrated in acetone at -30° C and vacuum impregnated at room temperature.  Twenty slices were stained with Mulligan’s stain before plastination.  The slices were measured before dehydration and after impregnation to monitor shrinkage. Shrinkage was acceptable (6.99% in lengths and 6.19% in widths) in both stained and unstained slices, and did not detract from the appearance of the slices.  The stain has thus far not faded on exposure to light.  Therefore, this procedure can be used to plastinate brain slices with quality comparable to low temperature plastination, which further extends the potential applications of room-temperature plastination

Plastination, developed by von Hagens in Heidelberg, Germany, is a unique technique of obtaining valuable, dry, odorless and nontoxic biological specimens (von Hagens, 1986; von Hagens et al., 1987).  Since 1990, plastinated specimens have been used to teach anatomy and neuroanatomy, and these specimens are a valuable supplement for learning 3-dimensional anatomy, for computer assisted modules and for self-directed anatomy trails (Ulfig and Wuttke, 1990; Purinton, 1991; Weiglein, 1993; Olry and Grondin, 1994; Côté et al., 1995; Szarvas, Szaras, Groscurth, 1995; Weiglein, 1997a; Baeres, Wamberg, Møller, 2001; Lozanoff et al., 2003).  Moreover, these specimens are durable, easy to use and do not drip on students’ handbooks (Holladay and Hudson, 1989).  For enhancing neuroanatomy teaching at St. George’s, University of London, we have produced plastinated brain slices using a low-temperature dehydration/ room temperature impregnation method (Adds, 2008) which differs from the standard method (de Jong and Henry, 2007) in that forced impregnation is carried out at room temperature.  Mulligan staining is a well-established staining method for gray matter, however the stain soon fades from wet specimens unless kept in the dark (Baeres and Møller, 2001).

In this study, we assess the ability of Mulligan’s stain to withstand dehydration and impregnation during plastination, and its subsequent resistance to fading in the cured specimen.  The advantage of the method described here is that it is a low budget and simple to set-up room-temperature procedure which produces high quality teaching resources.

The brains were obtained from seven formaldehyde-fixed cadavers (embalmed with 10% formaldehyde, 10% polyethylene glycol, 5% phenol and 75% ethanol) from the Dissecting Room of St. George’s, University of London.

Consent for anatomical examination and imaging had been given under the Human Tissue Act (2004).  The brains were cut into sections approximately 1cm thick using a rotary meat slicer, giving a total of 54 transverse and coronal slices.  The length and width of each slice was measured with a steel ruler before dehydration and after impregnation.  Twenty randomly selected slices were stained with Mulligan’s stain prior to plastination.

The brain slices were washed in tap water for three hours, and then immersed in 50% ethanol for a week with daily agitation, to wash out the embalming chemicals.  This step was repeated twice, using fresh 50% ethanol.  This was followed by washing the slices in running tap water for one hour.

The Mulligan-stained (see below for method) and unstained slices were pre-cooled to +4˚C then submerged in pre-cooled 100% acetone in an air-tight container at -30˚C.  The volume of acetone used was 10 times that of the tissue to be dehydrated.  The acetone was replaced weekly for three weeks.  The concentration of acetone was monitored with an acetonometer until it stabilised at 99% for verification of complete dehydration.

The dehydrated brain slices were immersed in BiodurTM S10/S3 (100:1).  The S10/S3 mixture had been pre-cooled to -30° C. The immersed slices were then placed in the vacuum chamber to equilibrate for 24 hours at room temperature (15 - 18°C).  After 24 hours the vacuum pump was started and the pressure was reduced gradually.  At every point where a few acetone bubbles were seen on the surface of silicone, it was left at that pressure to equilibrate for 2-3 hrs.  Pressure was regulated by adjusting the shutoff and bypass valves to permit stabilization of the pressure at certain levels.  The pressure was not lowered if bubbles were still rising.  In this way, the pressure was gradually reduced over a period of approximately 9 days until the final pressure of ~5 mm Hg was reached.  The change in pressure was measured with an analogue pressure gauge installed with the impregnation chamber.  The pressure in the chamber was lowered by approximately one third per day.  Care was taken to ensure that during impregnation the level of silicone was maintained no more than 2-4 cm higher than the level of brain slices in order to facilitate vaporisation of acetone.  The brain slices were then allowed to equilibrate for 24 hours before removal. The S10/S3 mixture was stored in the freezer at -30°C when not in use to delay thickening of the mixture and to allow reuse.

The staining method was derived from Tompsett’s modified Mulligan-staining procedure (Tompsett, 1956).  In this procedure the timing is critical as the white matter tends to picks up the stain.

A paired T-test (one-tailed) was performed on the lengths and widths of 54 brain slices before dehydration and after impregnation using Graph Pad Prism 4 software.

Table 1b – Length and Width mean and standard deviation measurements of specimens (n = 54) before dehydration and after impregnation with significance levels (p) and percentage change (%).

The structural details of the unstained slices were preserved after curing (Figs 1, 2). 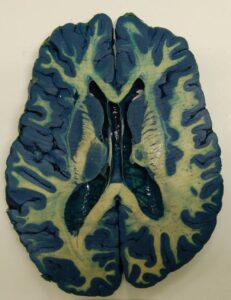 Figure 3: Horizontal, Mulligan-stained section of the cerebrum. The basal ganglia are clearly seen, together with the internal capsule and caudatolenticular bridges of gray matter.

The staining was found to be resistant to dehydration and impregnation, and the stain did not fade with time on exposure to daylight (Figs 3 – 7). After fixation, the total time taken was 8 weeks and 2 days (sectioning and staining - 2 days, dehydration - 3 weeks, forced impregnation - average 9 days to impregnate and 2 days to equilibrate, curing – average 2 days to drain and 3 weeks to cure, and tagging - 1 day).

We have found that using low-temperature dehydration and room-temperature impregnation of brain slices gives very good results with Biodur S10/S3.  Shrinkage was comparable to that achieved during low-temperature impregnation, and the Mulligan’s staining was robust enough to withstand dehydration and impregnation.  Suriyaprapadilok and Withyachumnarnkul (1997) have previously performed plastination of Mulligan-stained thin brain slices (with thickness 4-6 mm) which were later framed with plastic plates.  We have found that thicker slices (approximately 1 cm) can tolerate handling without framing (as suggested by Ulfig, 1990; Ulfig and Wuttke, 1990).  Furthermore, in wet brain specimens, Mulligan’s stain soon fades unless kept in the dark (Baeres and Møller, 2001) whereas the plastinated slices retain their color and have thus far shown no tendency to fade.

Shrinkage was approximately 7% from a combination of low temperature dehydration and room temperature impregnation, with and without stain, which was around 3% less than Suriyaprapadilok and Withyachumnarnkul (1997) report for low temperature impregnation of brain slices.  Therefore, it demonstrates that, contrary to expectations, S10/S3 impregnation of brain material can be accomplished satisfactorily at room temperature.  In the current economic climate, this protocol has the added advantage of reduced capital costs; however, it is vital to use air-tight containers in the freezer to avoid the risk of explosion. It is necessary to maintain acetone vapor below zero degrees Fahrenheit (-18° C) to prevent the vapors reaching flammable level (Baptista, Bellm, Plagge, Valigosky, 1992).

To conclude, this report suggests an alternative, achievable and relatively low-cost method of plastination of neuroanatomy specimens.  Work is on-going to investigate further applications of this approach.

Shrinkage after dehydration was not observed to analyze the effect of dehydration.  Moreover, no measurements were taken to establish the shrinkage of grey matter in comparison to white; however, no obvious distortion was found.

The authors would like to thank Ms. Lynda Jane Phillipson for her help in staining the brain slices.