Membership of the International Society for Plastination: A Profile

This report presents a profile of the membership of the International Society for Plastination (1987-2013). From an initial membership of 60, the International Society for Plastination (December, 2013), has 205 members from 43 countries. Although the number of members did fluctuate from year to year, there was a net growth in the society membership. In the 2013 roster of members, 81% of members have done plastination while 19% have not.  Members classified their laboratories as being small in 55% of responses while 35% stated they had medium size laboratories and only 9% of members considered their laboratories to be large.

The International Society for Plastination (ISP) was founded by Harmon Bickley in April 1986 during the Third International Conference on Plastination held in San Antonio, Texas, U.S.A. (April 21-25, 1986). Harmon Bickley, Ph.D. served as the Executive Director of the ISP from 1986-1995. In that meeting plans were made for publication of the journal. Volume 1, Number 1 of the Journal of the International Society for Plastination was released in January of 1987 and contained the list of the first members of the recently created society.

Overview and Total Members in History

In 1986 the International Society for Plastination was composed of 60 individuals from 11 countries (table 1), according to the roster of members published in the Journal of the Internal Society of Plastination in 19871. Only three of the 60 original members are still affiliated with the ISP. 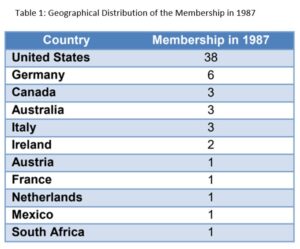 The year of 1998 was a good year for the ISP. There was a spike in the membership for the year totaling 232 members. Two year later (in 2000), there was a loss of 30% of the membership. After 2000, the membership started dropping steadily for a total loss of about 180 members.  In 2008, the membership total reached the bottom and only 53 members remained in the ISP.

Variations in total memberships year-to-year (Fig. 3), were based on reports found in rosters published in the Journal of Plastination until 19981-5, and in the business meeting minutes6-13 of the society published in the same journal.

Membership by the end of 2013 totaled 205 members from 43 countries.  The United States led the group with 56 members followed by Brazil (14), Canada (10), and Spain (10). Table 2 lists/shows the geographical distribution of individual members in the 43 countries. In the past 5 years the source of members to the Society has come from individuals attending the plastination workshops (Murcia, Spain and Toledo, Ohio, USA) and the Interim meetings (Ann Arbor, Michigan and Toledo, Ohio). 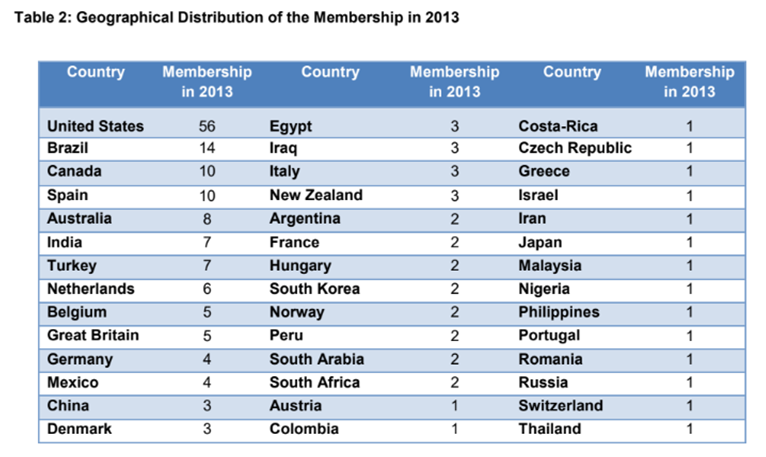 Members of the ISP are requested to update their profile information in the database of the Society.  Unfortunately, only 170 of the 205 members completed the information. In order to establish the profile of the society two questions were asked: Do you plastinate? What size is your lab? 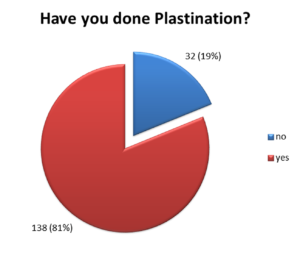 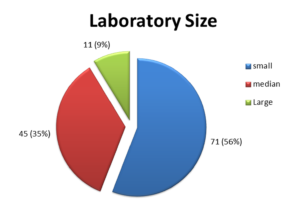 Analyzing the behavior of the membership of the ISP since 1987, it is clear that as in many other scientific organizations membership fluctuates. How do we interpret this change? What impact does it have on our organization?

The “Decade of Foundation” (1987-1998) was a time of uncertainties. In 1987 the founding father of the ISP, Dr. Harmon Bickley in the first issue of the Journal of the International Society for Plastination stated: “…this is a very precarious time in the development of the organization. Like any neonate, we have a higher risk of failure than those with even a little bit of history. Our needs at the time of this writing are formidable”. He challenged the society to attract more members and encouraged the participation of all. The society heard his calling, and the membership grew from 60 to 232. These were times of excitement for plastination; a new field of science that was born and it was in its infancy. There were challenges also.  The traditional courses of anatomy and pathology were challenged by PBL (Problem Based Learning). What could have been constructed as a complement to dissections in anatomy and necropsies in Pathology, PBL was seen as a “substitute” to both practices. Funding for laboratories of anatomy and plastination in the U.S. was drying. Many laboratories that were established in the 80’s were closing not only due to lack of funding but also because the retirement of expert plastination faculty and technicians alike. These changes drastically impacted the ISP.  In 1998 the ISP had 232 members; but in 2 years it lost 68 members, with a total of 164 in year 2000. The ISP was entering the “Decade of Retraction”.

In the “Decade of Retraction” (1999-2008), the ISP lost 179 members. In average the ISP lost 36 members a year. Keeping the membership alive and the relevance of the society was a major challenge. It was a reflection of what was happening in the learning environment of universities all over the world. Problem Based Learning gained strength and spread throughout the world. The Information Technology revolution that started in the end of 90’s reached its potential by the end of the decade. With the advancement of technology, it was now possible to have digital dissections and virtual slides which pressured traditional anatomy and pathology courses to make concessions. Modern medical curricula were given less importance to anatomy education and to the acknowledged value of dissection (Sugand et al., 2010).  The value of new resources such as computer-assisted learning was considered to be a cost-effective means to teach anatomy. Many traditional laboratories of anatomy stopped dissections or replaced dissections with prosections. The “old-fashioned” methods of teaching were regarded by reformers to be incompatible with modern learning practices. (Turner, 2007).  The investment to keep plastination laboratories operating was not considered to be cost-effective. Many laboratories of plastination were closed so training of personal in plastination was considered to be irrelevant. By the end of the decade ISP had only 53 members.

It was clear that changes made in the past decade in the curriculum were not beneficial to the practice of medicine and healthcare professions. A substantial reduction in the competence of healthcare professionals to recognize anatomical structures was leading to an increase in litigations. The cost-effective approach to education advocated in the past decade proved to be inadequate. Maximizing the learning benefit, available from a combination of “old-fashioned” and “modern” methods, should be the choice for healthcare education. While the universities were engaged in the debate of relevance of one method of education over another, the public’s fascination with human anatomy was growing, as evident by the millions of viewers of the exhibitions of cadaveric material. The public and media pressure put anatomy back into the game. Plastination was not only a possibility but also considered to be an asset for universities. After 10 years of declining membership, the ISP started the new decade with the addition of 45 new members. The ISP was entering the “Decade of Reawakening”.

The Decade of Reawakening (2009-present) is still being written. It is obvious that since 2010 until the present, the membership of the society grew by 152 members, that is, 300% since 2008. The interest for plastination has also increased and the evidence is seen by the interest in workshops on plastination offered in many places around the world. New laboratories are being created in many countries.  The modernization of anatomy is sought by its relevance and fascination and not for its extinction. The new trend in education has been self-directed learning. The use of digital media, such as animations, radiographic images and digital dissection software are a complement to the study of anatomy. Universities have even abandoned dissection in favor of user-friendly multimedia, alternative teaching approaches, and newly defined priorities in clinical practice (Sugand et al., 2010).  Anatomical prosections and museums of anatomy are more relevant now with self-direct learning than they were a decade ago.  Preserving prosected specimens with plastination is cost-effective. If this trend continues, plastination will be an investment and the future of International Society for Plastination will be guaranteed.