Ultra-thin epoxy sheet plastination is a novel technology for anatomical research involving dehydration, degreasing, impregnation, curing and cutting. Every step of the process may affect the experimental result. This study’s aim was to find an optimal temperature, duration of impregnation, and curing of the epoxy resin block. Eight rat heads were divided into two groups, 4 heads per group A and B. After fixation in 4% paraformaldehyde, dehydration, and degreasing, the rat heads were placed in a resin-mixture in a vacuum chamber at room temperature (RT) for 5 days with pressure decreasing and continued at 40 °C for a further 4 days. After impregnation, group ‘A’ heads were placed in two mold and cured in a 45 °C or a 65 °C oven for 6 weeks, respectively. Group ‘B’ were prepared the same as Group ‘A’, except they were cured in a 65 °C oven for 14 days. The color, transparency, and hardness of the resin blocks were observed and recorded daily during the curing process. This study was approved by the ethics committee of our university. The block in the 45 °C oven was hardened until the end of week 6. It had good transparency throughout the 6 weeks. The block in the 65 °C oven was hardened in 2 weeks, exhibiting good transparency. After 3 weeks, the block gradually became black and opaque with poor transparency. In conclusion, curing at 65 °C for 10 days is recommended for the epoxy resin block.  Longer than 10 days may result in a block with poor transparency.

The plastination technique was first introduced by Gunther von Hagens in 1977 to preserve bodies or body parts for research and educational purposes (Von Hagens et al., 1987). Its main procedures include fixation, dehydration, degreasing, impregnation, and curing. Through these procedures, water and lipid of the biological tissue are replaced by curable polymers: epoxy, silicone, or polyester-copolymer (Von Hagens et al., 1987). The plastinated specimens are dry, odorless, and durable. Epoxy plastination can be performed in two ways. One is to slice a frozen specimen with a bandsaw and then impregnate the slices with epoxy resin. The thickness of the prepared slices is about 2-3 mm. Another is the ultrathin epoxy sheet plastination, in which a whole specimen is impregnated with resin, hardened as a block of resin,  and then  sectioned using a diamond bandsaw. The thickness of the ultrathin slices ranges from less than 100µm to 500 µm (Liugan et al., 2017; Xu et al., 2017; Bond et al., 2020).

In preparation of a resin block for ultrathin slices, impregnation and curing of the block are critical to obtain high-quality transparent slices. Sora and colleagues (2004) refined the block technique by increasing temperature to enable complete impregnation of larger tissue blocks and assure transparency of blocks (Sora et al., 2007; Vargas et al., 2020). However, it is common for tissue blocks to appear opaque/ dark, due to various curing temperatures and duration in current practices.

Therefore, this study explored optimal temperature and duration for the impregnation and curing of the epoxy resin block.

A total of eight rat heads were used in this study which was approved by the University of Otago Committee for the Care and Use of Laboratory Animals (AUP-19-04). After fixation in 4% paraformaldehyde, the rat heads were prepared as described below.

Eight rat heads were submerged and dehydrated in <99%, -20 °C acetone for four weeks. Acetone was changed weekly to ensure the efficacy of the dehydration process. After complete dehydration, the heads were placed into fresh acetone at room temperature (RT, 20 °C) to degrease for two weeks. 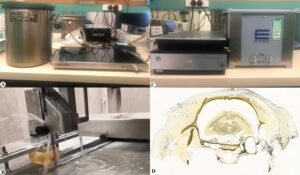 The rat heads were submerged in a resin-mixture (E12/E6/E600=100:50:0.2; BIODUR®, Heidelberg, Germany) at RT in a vacuum chamber with gradual decrease of pressure for five days (Fig. 1) from atmospheric pressure to 1.7 mmHg. Pressure was monitored by observation of bubble production and size. After five days, the temperature was increased to 40 °C for four days. This temperature increase during impregnation prolonged the lowered resin viscosity which enhances resin penetration into deep tissue structures (Fig. 1).

In order to determine optimal temperature and duration for curing, two groups of rat heads were treated with different conditions.

After impregnation, 4 rat heads were placed in two molds, 2 heads per mold. The size of the mold was 4 x 8 x 20 cm3. The molds were filled with resin-mix (same as impregnation-mix) and left at RT for four days to ensure the specimens were well settled and submerged (not floating) in high viscosity resin. Then, they were placed in a 45 °C or 65 °C oven for six weeks, respectively, to cure. Color, transparency, and hardness of the blocks were observed and recorded daily.

These 4 rat heads were prepared as Group A and left at RT for four days, except the impregnated blocks     were all cured in a 65 °C oven until the 10th and 14th day, respectively, and then moved to RT. Color, transparency, and hardness of the blocks were observed and recorded daily during curing.

Slicing with a diamond saw:

The hardened resin blocks from both groups, A and B, one block each, were cut into ultra-thin slices with a diamond saw (BS270, DRAMET, Kleinmaischeid, Germany) (Fig. 1). The obtained slices were washed ultrasonically before examination (Fig. 1).

Temperature and duration for impregnation:

The resin-mixture remained fluid during impregnation. The slices from the hardened blocks demonstrated that all specimens were fully impregnated.

Temperature and duration for curing:

Group A was used to compare the effect of two different curing temperatures, 45 ˚C and 65 °C, and the time-line of appearance and hardness of the resin blocks for the 6-week curing period. The block in the 45 °C oven was not completely hardened until the end of week 6 and was transparent throughout the six weeks (Figs. 2A, 2B, 2C, 2D, 2E, 2F). After six weeks, their color and transparency remained unchanged at RT. The block in the 65 °C oven was semi-hardened at two weeks and completely hardened by the middle of the third week. 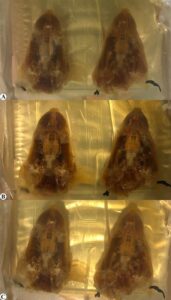 The block was transparent in the first week (Fig. 2G) and appeared a light yellowish color that effected the transparency of the block on the 10th day (Fig. 2H). The block became opaque by the third week and then further darkened during the following weeks (Figs. 2G, 2H, 2I, 2J, 2K, 2L).

Group B was used to verify the optimal temperature and duration for curing which were explored in Group A. One of two prepared blocks was semi-hardened and appeared colorless at day 10 (Fig. 3A), and completely hardened after moving into RT for 4 days without color change. The second block was completely hardened with a light yellowish color at day 14 in a 65 ℃ oven (Fig. 3B). The transparency of the block remained the same after moving into RT for another week (Fig. 3C).

the resin-mix. Sora et al. suggested using 30 °C for the first 2-3 days until reaching pressure below 5 mmHg, and then increasing to 60 °C on the last day (Sora, 2007; Sora et al., 2012). The viscosity of the resin-mixture must be closely monitored after increasing the temperature, as the viscosity of the resin mixture is thinner at first but becomes very viscous just in a few hours, when impregnation must stop (Sora, 2007). In our study, the vacuum chamber was used at RT for the first five days and then increased to 40 °C for the last 4 days. We did not raise the temperature to 60 °C because we wanted to test a longer impregnation duration which may facilitate complete impregnation for larger specimens in future studies. The resin mixture’s viscosity remained excellent/low for 9 days and remained workable up to 14 days. Thus, our RT-to-40 °C “two-phase impregnation” may suit epoxy resin block plastination of large specimens.

Optimal temperature and duration for curing

Temperature is also a crucial factor for curing. Four days at 65 °C was suggested by Sora et al. (2004), but it may not apply for large specimens, such as the whole pelvis or head (Sora, 2007). Fast curing may result in a large resin block hardening only on the periphery but not completely hardened centrally. Good quality ultrathin epoxy slices cannot be obtained from a soft resin block. In the present study, two different curing temperatures (45 °C or 65 °C) were used, with variable outcomes. The 45 °C blocks remained transparent for 6 weeks and eventually became hardened at the end of 6 weeks. The blocks at 65 ° hardened in 2 weeks, and thereafter the blocks became opaque very fast, in just hours. Therefore, although hardening the block at 45 °C can ensure block transparency, its curing time is too long, particularly for a large specimen. Hardening at 65 °C accelerates the hardening procedure, but time needs to be well controlled, otherwise the block will become darkened. To stop darkening, the block must be moved to RT as soon as the resin block color changes to yellowish. In our study, it was about 14 days.

Based on the results of the present study, we recommend that the optimal temperature and duration for epoxy block curing is 65 °C for 10 days. The hardened block will have good hardness and transparency and be suitable for ultrathin slice preparation and examination. Longer than 10 days curing at 65 °C may result in dark appearance of the block and poor transparency. The curing temperature at 45 °C will take a long time for hardening, and the core of the block may not be hardened thoroughly.

One of the limitations of this study was the sample size. The rat head tested in this study was only a few cubic centimeters in size. It may be worthwhile performing similar studies with larger specimens. We used the recommended protocol in our other studies in which large specimens, such as the human cadaveric skull base (Liugan et al., 2017) and hemi- pelvis (Xu et al., 2017), were prepared as resin blocks and high-quality ultrathin epoxy slices were obtained. Other limitations may include the effect of varying resin- mix ratios. In this study, we used only one ratio which was E12/E6/E600=100:50:0.2. Different ratios of the resin-mix, particularly the concentration of E600, may affect impregnation and curing. We, as well as other laboratories (Sora, 2007) use 0.4 rather than 0.2 part of E600 for the mixture. More E600 will speed up the curing procedure.

We sincerely thank Assoc Prof Yiwen Zheng who collected and fixed the rat heads for this study, and to Plastinator Marline Black who manages the Department Plastination laboratory.