The trachea divides into the right and left principal bronchi. Each principal bronchus divides into lobar bronchi, three for the right lung (superior, intermediate, and inferior) and two for the left (superior and inferior). Lobar bronchi further divide into the segmental bronchi, so each lung has ten segmental bronchi (bronchi segmentales) (Shah et al., 2005). The smallest well-defined anatomical, functional, and surgical unit of the lungs is the broncho-pulmonary segment, which is supplied independently by a segmental bronchus and a tertiary division of the pulmonary artery. Each broncho-pulmonary segment has its own lymphatic drainage and autonomic nervous supply and is separated by connective tissue septa (Shah et al., 2005). The branching pattern of the bronchial tree and spatial arrangement of the vessels of the lungs have not received a lot of anatomical and clinical attention, although they serve a significant role in respiration. There are studies on the tracheobronchial tree down through the primary bronchi and lobar bronchi and its normal branching pattern (Gonlugur et al., 2005), but there is a paucity of literature regarding the branching pattern of the segmental bronchi with their vascular patterns, especially using three-dimensional (3-D) corrosion endocasts. Casts of anatomical structures are intended to clarify otherwise difficult-to-understand anatomical spatial relationships (Henry, 1992). They provide 3-D information that is difficult to discern from two-dimensional images or gross specimens. Rather than learning from theoretical descriptions, these 3-D replicas are based on real specimens to support the learning process. In their first year of medical school, students often struggle to understand and comprehend the subject because they fail to visualize the three-dimensional anatomy of the internal structure of the lungs from textual descriptions in books, two-dimensional images used as teaching aids, or digital images. The 3-D anatomy of the lungs is displayed well by a corrosion cast of the lungs, which is required to understand the branching pattern of the tracheo-bronchial tree and the interrelationship of overlapping circulatory vessels. Student knowledge acquisition may be enhanced because they use multiple senses to see and feel an actual representation of organs (Aultman et al., 2003). The anatomical accuracy and durability of lung casts make them effective tools for medical students to accelerate gaining of knowledge and strengthen diagnostic abilities. The path and correlation of blood vessels, as well as the pattern of the bronchial tree, can be traced using corrosion lung casts. The bronchovascular cast helps students to understand the orientation of the branching pattern of the tracheo-bronchial tree and pulmonary vasculature down to the level of the respiratory bronchioles. The preoperative knowledge of the anatomy of the bronchopulmonary segments will be useful in interventions such as bronchoscopy and other operative procedures like brachytherapy, postural drainage, segmental lung resection, and laser therapy (Frick, 2017). Bearing in mind the academic, as well as the applied importance of the subject, the present study aimed to study the vascular pattern with the branching pattern of the bronchial tree using 3-D corrosion endocasts, made by colored cellulose acetate butyrate (CAB) granules, of lung specimens obtained from subjects of Indian origin.

After ethical clearance from the relevant authorities of the tertiary care hospital, the samples were obtained from autopsies carried out at the mortuary, or from the Department of Anatomy, depending on availability. The sample size was ten lungs (five pairs of lungs obtained from five individuals) of various age groups, and both sexes (Table 1).

Lung specimens were collected within 24 hours of death, and dissection of the thorax was undertaken following the guidelines of Cunningham’s Manual of Practical Anatomy (Koshi, 2017). After the anterior thoracic wall was incised and elevated, the lungs were carefully removed after transecting the principal bronchi and pulmonary vessels at the hilum of the lungs. The extracted lungs were then washed in running tap water, and the principal bronchi were cannulated with appropriately sized syringes and flushed with normal saline solution to remove blood clots. For injection of CAB, cellulose acetate butyrate (CAB) granules (casting media) were dissolved in acetone (1: 2) for one hour to obtain a homogenous solution. At the hilum of the lungs, the principal bronchus, pulmonary artery, and pulmonary veins were identified and cannulated with syringes.  Red colored CAB solution was injected via a cannulated syringe under constant pressure into the pulmonary veins, and blue solution into the pulmonary arteries. In a similar fashion, green colored solution was injected into the cannulated principal bronchi. The injection of the solution was continued until the lungs became tense, and resistance was felt. After injection, the pulmonary vessels and principal bronchi were ligated with suture material to prevent efflux of solution and to maintain the injection pressure within the system. The specimens were then placed in a refrigerator overnight at 0-4° C to allow the solution to harden. After 24 hours in the freezer, the lung specimens were palpated to determine whether the solution had hardened to form a

solid cast, as the acetone evaporated. The hardened specimens were washed under tap water for half an hour, and subsequently immersed in 35% hydrochloric acid (HCl) for maceration of the parenchymatous tissue (Rani et al., 2014) (Fig. 1). This was followed by washing the macerated specimen in copious amounts of water and pruning with fine forceps to remove all the debris to get an intact well-formed cast. The endocasts were placed on blotting paper for further observations. The ramification of the bronchial tree was observed and photographed. The lobar and segmental bronchi according to lobes were labeled as follows: 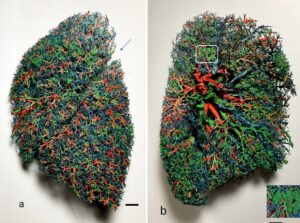 Commonly used materials for preparing lung casts are silicone RTV (Henry, 1992) and epoxy resin (Rakesh Narayanan, 2015). A disadvantage of epoxy methods is that the injection needs to be done soon after mixing the casting material with solvent and hardener, before the solution starts to solidify. The other demerit is that the solution is viscous, and it is difficult to fill the finest respiratory exchange structures, respiratory bronchioles and alveoli. The casts obtained in the present study are cost-effective (approximately 500 Indian rupees [7 USD] per lung; RTV is around $10/lung) and finer structures are visible, as with silicone and epoxy resin casts. The present study focused on the bronchial and vascular pattern in the lungs and their spatial relationship. The classical distribution of the bronchial tree within the lungs as described in the textbooks formed a general pattern which was constant in nine of the lungs in this study. Several other studies have reported normal as well as abnormal branching patterns of the primary bronchi (e.g., Gonlugur et al., 2005; Vassiou et al., 2013) and segmental bronchi (Boyden & Hamre, 1951). In the present study, the normal pattern of B1, B2, B3, and B4, B5 was found in 100% of the right superior and middle lobes. However, on the contrary, Boyden et al. (1948) and Kýlýç et al. (2010) reported an abnormal branching pattern in the right superior lobe with an incidence of 14% and 13.33%, respectively. In the present study, the incidence of the normal pattern of B1, B2, B3 was found in 80% of the left superior lobes. The occurrence of the B1+B2, B3 variation was 20% in the left superior lobes. In a study by Ghaye et al. (2001), a similar B1+B2, B3 variation was found in the left superior lobe, which accounted for 17% of lungs. Umesh et al. (2019) found similar variations via conventional dissection methods. In the present study, the normal pattern of B6, B7, B8, B9, B10 was found to be 100% on both right and left sides. Authors such as Ferry & Boyden (1951) conducted their study only on right inferior lobes, and Berg et al. (1949) on left inferior lobes only, whereas Kýlýç et al. (2010) and Ghaye et al. (2001) conducted studies on both right and left inferior lobes, and both found some variations in the pattern (Table 3). In the present study, we did not find any accessory bronchi, however, Kýlýç et al. (2010) had reported an accessory bronchus after the lingular division on the left lobe, with an incidence of 13.33%.

The small sample size was a limitation in the present study, which may be the cause of deviation in the percentage of particular variations when compared to other studies with a larger sample size. In further research projects, the variability of the branching pattern beyond the segmental bronchi can be studied as, in our study, it included variations only in the segmental bronchi. The corrosion cast described here is long-lasting and durable, and will be useful for teaching undergraduates by illustrating the three-dimensional anatomy of the vascular pattern, and the branching pattern of the bronchial tree in the lungs.

Preparation of bronchopulmonary casts is a cost-effective method to understand and visualize the branching pattern of the bronchial tree and the vascular pattern in the lungs. Comparisons between color-coded casts, and the labeled diagrams accompanying them, are clearly explanatory, and are an excellent representation of the complex anatomy of hollow organs. These models will be helpful for undergraduates and other medical personnel to get a clear, three-dimensional idea of the bronchopulmonary segments and a better understanding of the anatomy of the respiratory system