Dehydration is a crucial step of plastination.  Acetone is the dehydrant of choice for both cold and room temperature plastination. Contaminated (used) acetone produced during dehydration contains varying quantities of water, embalming chemicals and fat.  When recycled with most conventional recyclers, the distilled acetone has a purity of 96-97.5%. In order to remove the remaining water and increase purity of recycled acetone to ~100%, molecular sieves were used. 22.7 Kg (fifty pounds) of 3Å pore molecular sieves were used to remove the remaining 2.5-4% water from 208 l (55 gallons ) of recycled acetone [sieve to acetone ratio {454 g (1 lb): 3.78 l (1 gallon )}]. Exposure of 97% acetone to molecular sieves consistently yielded 99.5-99.9% pure acetone.

The plastination process uses acetone for both cold (Biodur) and room temperature plastination. For thorough dehydration of specimens to be plastinated, large quantities of acetone are needed to complete dehydration and high purity acetone is needed to exchange any remaining water from the tissue as well as remove fat (Grondin et al., 1997). Conventional distillation, freeze separation of fat and vacuum distillation have provided laboratories with the ability to remove most of the water and other contaminants, but do not yield pure acetone (Grondin et al., 1997).

The process of producing pure acetone from a mixture of acetone and water is a complex problem.  An acetone-water mixture forms a tangentially zeotropic mixture, therefore separation of this mixture into pure products is difficult by ordinary distillation (Naidu and Malik, 2010). The acetone-water mixture is said to be tangentially zeotropic because at the largest concentration for the mixture, the vapor composition and the liquid composition of the mixture are not equal, therefore, as the solution is heated at a constant vapor pressure the ability to separate the water from the acetone becomes infinitely difficult under normal distillation procedures.  A zeotropic solution by definition is a mixture of two liquids that shows no single boiling point, but rather a range of temperatures over which evaporation occurs. This causes a problem because in an acetone/water mixture as the concentration of acetone increases and the concentration of water decreases it becomes difficult for just the acetone to evaporate without bringing water molecules with it (Hilmen, 2000).  This physical interaction creates a barrier that prevents complete separation of water from acetone with standard distillation techniques. Thus using standard fractional distillation can only yield 96-98% pure acetone. The remaining water must be removed using a desiccant such as molecular sieves.

A molecular sieve is a synthetic zeolite (crystalline metal aluminosilicate) that contains many small pores of a precise, uniform size that is used to absorb liquids (Breck, 1964). Molecules small enough (e.g., water), pass into the pores and are absorbed (trapped in the sieve) while larger molecules (acetone) cannot enter the pores, and hence the pore has no effect on the larger molecules. Because they operate at a molecular level, molecular sieves are more efficient than a common filter.

The interaction of acetone, water, and molecular sieve is physical. The water enters the pores of the sieve and gets trapped while the acetone cannot enter the sieve because of its larger size, and therefore water is trapped in the sieve and removed from the solvent. The selectivity of a molecular sieve is determined by its pore size; molecules with a diameter less than the pore size will be efficiently absorbed while larger molecules will be excluded (Breck, 1964).

The diameter of water is 1.93 3 Å, while acetone’s diameter is 3.08 Å (Nadykto and Yu, 2003). The pore opening of the molecular sieves is approximately 3 Å, large enough to allow water to pass through the pore and be trapped but small enough to prevent the acetone passing through the pore (Breck, 1964). Therefore a type 3Å molecular sieve will absorb a molecule less than 3Å in size (e.g., water) and has an absorption capacity of 22% by weight (Kline and Daniels, 1999).

This paper introduces molecular sieves as a cost-effective method, of transforming conventionally distilled acetone (95 - 97%) into acetone pure enough (99. 5 to 100%) to complete the dehydration of specimens for plastination. 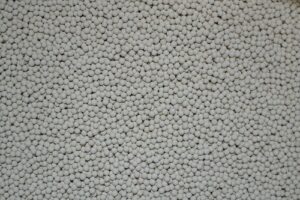 Used acetone (<95%) from freeze substitution and room temperature dehydration was recycled using conventional recyclers (BR Instruments and Omega Recyclers) yielding 97% purity.  Two litre aliquots of distilled acetone (97%) were transferred to a glass cylinder. Three hundred and three grams (0.66 lbs) of molecular sieves were added to 2 litres of recycled acetone and stirred.  After 24 and 48 hours of exposure of acetone to the molecular sieves, the purity of the acetone was measured using an acetonometer. The acetone was stirred before sampling to ensure adequate mixing.  The weight of dry molecular sieves before acetone exposure and after recycled acetone exposure was measured and compared using a digital scale.

From these observations, it was determined that 0.45 Kg (1 pound) of molecular sieves would be added to 3.78 litres (1 gallon) of recycled acetone.  To facilitate adequate exposure of the sieves to acetone, a container which would allow easy influx of acetone into the beads, but yet keep the beads inside that container, was designed and manufactured.  Because of the large volume of acetone used and recycled, a 208 L (55 gallon) drum was chosen for the reclamation project.  A cylinder, 24.1 cm x 78.8 cm (9.5” x 31”),  which would hold the quantity of sieves necessary for 208 L of recycled acetone, was constructed  (VM Systems, Inc., http://www.vmsystemsinc.com ) from perforated [ 1.5mm (0.0625”)] 16 gauge stainless steel plate (fig. 2).

Molecular sieves may be reused by allowing them to air-dry in a fume hood for a few days to remove all the surface acetone.  Once acetone was no longer detected (smelled), the molecular sieves were transferred to an oven-safe container (metal or Pyrex) (fig. 7) and placed into a 250°C oven for 24 hours.

The physical water extraction from the acetone/water mixture with molecular sieves resulted in increased temperature of the acetone due to the exothermic reaction and consequently boiling (fig 6). 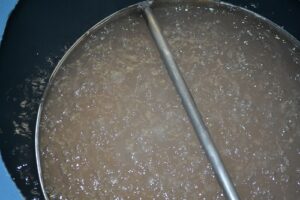 Figure 8: Variation in the temperature of acetone during exposure to molecular sieves over time.

with molecular sieves yielded acetone purity of 99.5-99.9% (fig. 9).  After 48 hours of treatment with molecular sieves, the purity of acetone remained constant. A cloudy substance of dark brownish color was dispersed in the acetone after exposure to the sieves. When left undisturbed, this product settled to the bottom of the container. 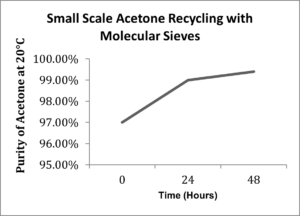 Figure 9: Variation on the purity of acetone after exposure to molecular sieves over time.

Distillation of used acetone has been a common practice in the laboratory of Plastination at the University of Toledo for many years.  Conventional, commercially available distillers (BR Instruments and Omega Solvent Recyclers RS6) were used.  The purity of distilled acetone yield of these recyclers was ~97% similar to the 98% recovery by West (1973). However, just as important, conventional recyclers remove most other impurities of which fat is a major impurity.  The molecular sieves will not remove fat so it is important to recycle the acetone prior to using the molecular sieves. By using the molecular sieves in combination with the distillation process, acetone with 99.5-99.9% purity was produced.

Dehydration of biological specimens, by freeze substitution or at room temperature, requires at least three changes of acetone in order to have the specimens fully dehydrated for plastination. Recycling acetone by conventional methods will yield acetone pure enough (97%) to perform the first two batches of dehydration. The third bath will require the use of new acetone (100%).  In the United States the price for a 208 L (55 gallon ) drum of acetone varies from $550.00 to $1,000.00 depending on the fluctuation of the market and if the acetone is dispensed in a plastic or a metal container. The cost for 25 Kg (55 lbs ) of molecular sieves is $217.00. Because molecular sieves can be reused many times, restoring acetone to almost 100% saves money by not having to regularly purchase new acetone. However, if you did not reuse the sieves, the $217 of sieves would produce >208 L (55 gallons) ($550 worth) of pure acetone.

Molecular sieves have been used for many years to remove specific solvents from solutions. They have been mostly used for small-scale dehydration of solvents. The same process can be done on a large scale with very simple equipment and a simple protocol.   We were able to get the same results we had with a small-scale experiment of dehydrating acetone and  a large-scale dehydration, that is,  more than 189 litres (50 gallons) of acetone.

In the small-scale treatment, the silica dispersed in the solution was easily removed by filtering the acetone with a small towel. The same procedure could be applied to the large-scale acetone but it is not practical because the large volume of acetone involved would lead to excessive exposure to acetone vapors.

The extraction of water from the acetone/water mixture with molecular sieves resulted in increased temperature of the acetone /water mixture during treatment due to an exothermic reaction. In the small-scale experiment the temperature variation was not evident.   In a medium operation, ~75.7 litres (20 gallons), temperature rise at lab temperature (12 °C) was only 33 °C (final temperature of the mixture)  (R. Henry, personal communication, Dec. 2013).  In the large-scale treatment the temperature increased from room temperature (25 °C) to 50°C.  This was a concern because the boiling point of acetone is close (56°C).  Because evaporation of acetone occurs during this process as is usual when handling acetone, appropriate safe containers were used for the acetone in a well-ventilated room with reduced spark possibility. The plastic drum of acetone was sealed to minimize loss of acetone vapors. One alternative to prevent the exothermic reaction from reaching a high temperature is to work with cold acetone. Another alternative is to work in an air-conditioned lab at a lower room temperature.

The use of molecular sieves is safe and economically feasible. This work shows that pure acetone can be produced in a relatively short time.  This process consistently yielded acetone with purity ranging between 99.5-99.9%. The procedure is simple and can be conducted with minimal training and materials. There is only minimal loss of acetone due to evaporation.

In conclusion, the use of molecular sieves to produce pure acetone will complement the dehydration of acetone using conventional distillation methods and has proved to be very efficient.  Waste acetone is virtually eliminated saving laboratories hundreds or even thousands of dollars in purchasing new acetone, recycling and disposal fees, in addition of being an eco-friendly process. The process is safe but when treating large volumes of acetone good ventilation and safe (spark proof) areas are desirable because of the acetone vapor that is produced in larger quantities.